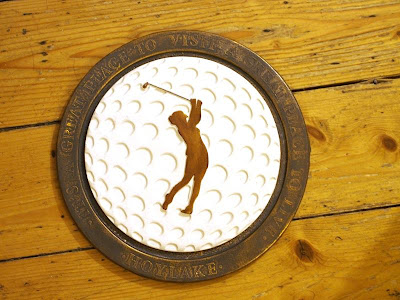 I've been looking for ways to help my art pay, so a few months ago, I decided to make something that would commemorate the Womens Golf, being held locally at The Royal Liverpool in Hoylake. I'd decided to depict  a golfer, which one though was the uncertainty. I did a typically male google of a ladies golf swing, and I must admit, there were a few pictures out there that tempted me! But after reading further, I came across the story of Melissa Reid, you can read about it  here. 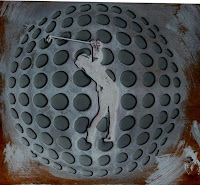 Once I'd read that, I knew I wanted her to represent not just the spirit of the Ladies game, but that of life itself. To overcome something so hugely tragic like that takes a special kind of person.
I was completely isometrically ellipsed out after carving the ball from a block, and I realised, to get the look I wanted would take two separate castings. It took a few days, but I was happy with the finished piece. I've done a generic backing of Hoylake, so if anything else is happening, I've still got the mould, and I can just make a new centre-piece. Theres not as many hanging on walls as I'd like though, the Gallery in Hoylake that was selling them Seagrass, suffered less visitors during the golf than normal. All the traffic and visitors were guided away from the shops, and over a muddy field to access the golf course that way. It was in the local papers, all the shop keepers were up in arms, restauraunts had bought extra food and hired extra staff. You can read about it on this link. A bit like the Olympics in a way! Theres still a couple at Seagrass. I must go photograph it in the window before all the Xmas decorations go up! 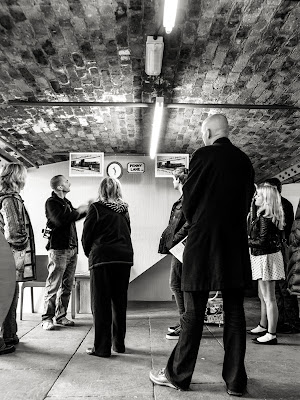 I displayed the Sweet Melissa at my recent exhibition, Deliverance, at the Albert Dock in Liverpool. It was really well received. One couple who came in on the final day started asking me about it. I told them, and it turns out the guy plays golf with her dad every once in a while, and he took my card, and said he would tell her dad about it. I never did contact Melissa about it, so I do hope she gets in touch. Be a fitting end to the piece to truly home the most important one!