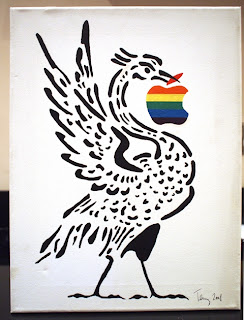 Its looking a bit battered now, but this is the original painting from 2008, after I first visited the 'new' Liverpool 1. I said at the time, 'The liverbird embraces under protest, and delivers us the new original sin....the apple of consumerism.'
After wandering round for a few hours, the one single thing that captured my attention was the apple shop. Without signage, the gold and silver apple above the doorway stood as a symbol of universal recognition. And peering high above the new development, watching the the latest change to it's waterline, was the ever present Liverbird itself. I combined these two symbols as you see it. The plan was to go into the apple shop, and put my picture on every single screen in the place. iphones, itouches, laptops.....I don't know if the ipad was around then....I don't think so, and document it with photographs. But apple said I couldn't do it without the proper authorisation. Seven emails later to find the right person, I gave up, and stuck it on my ipod. Its still there today.
It's a sad day, and the world is a less bright place now that Steve Jobs is no longer with us. It takes a genius mind to inspire the business, technological, creative and consumer world, and we've all been touched by his vision.
Posted by thehorsesmouth at 19:19