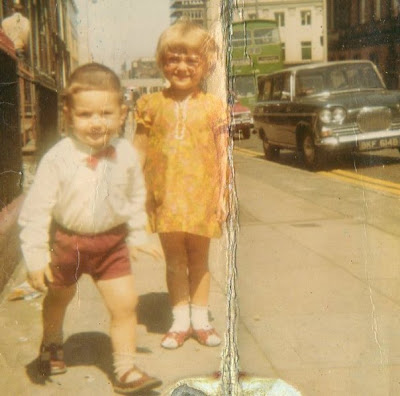 Someone said the other day I looked like I was on a mission in this picture. I probably was. Its taken back in 1968 outside 22 Seymour Street where I was born , when t-bar sandals and dickie bows were all the rage. Someone obviously tucked my shirt in for that photograph, but wasn't quite quick enough to catch the picture before I set off again!
There's a few journeys I'm on at the moment with my art, I've just set the ball in motion on an idea I've worked on for the last 2 years, my Kenny Dalglish sculpture, and you can read about that on a separate blog.
Theres a couple of ideas I've got out there, but competitive art commissions can be very laid back about deciding, so it was good to have the time to prepare for the start of my Kenny campaign, and I did it at Madelaineartz Gallery in Liverpool City Centre, where she annually hosts  her Mad About Liverpool Exhibition. I missed the opening by the mayor, and the music, and the speeches, I got in just in time to find out that I hadn't won the raffle though. There was a prize for best artwork, which was jointly won by another Kenny Dalglish artwork. It was quite incredible, David Foster had used nails to re-create his, 31,950 of them, one for each minute he played.
So I'm hoping that with his popularity, once the medal goes to the stadium after the exhibition, the project will start to take off.
I've twice bumped into someone I worked with a few years ago this week. We were having a chat about some pictures I took at the time, and talked today about a project he's working on, where they will fit nicely into. Some great shots, and some of the subjects are quite well known now, locals too, so fingers crossed there, a nice paid gig for a change. Bit of money next week from some shadowboxes I'm making to infill a fireplace, only requirement is their superlambanana fits in one of them. I watched the original getting made funnily enough, as I was making the sets at the time on a Brazilian film called Maua, and had my workshop space at the old Bryant and May factory in Speke. They were making it in a unit at the side of the old factory, and I saw it at various stages from the steel armature, but missed the painting stage.
I've been asked to be the Official photographer again for this years Wirral Studio Tour, I know what I said last time about it, but I took some great pictures of  Tommy McHugh, you can see some of them here, blogged about, on what would have been his birthday His story is amazing, and theres something I want to work on, but the time's not right yet.. I got that from it last time, so I said yes when they asked, of course I would, and it was great to be asked again.
I'm waiting on the council for the sculptural mural I'm doing in Hoylake, planning has had to be sought, so I'm not holding my breath, and I'm guessing spring there.
I missed last nights opening, because I was sat outside talking to someone who lost his brother at Hillsborough in 1989, and he was telling me his story. He volunteers at the Hillsborough Justice Campaign shop outside Liverpools Football Ground, where they sell goods to help fund their Campaign, and offer a place to meet, and talk. After listening to him, I looked on their website again at more of their stories, real and personal ones and read them. There are interviews and stories, documenting their campaign for one thing, Justice. Quite how they had the strength after 20 years to carry on is unimaginable, but they did, and when they chanted for what they sought to Andy Burnham on live TV, finally someone listened to them. The Nation should hang its head in shame on what they've been through, and what they were forced to do in getting there. An Establishment Cover up from the top, and a smear on the fans, the City of Liverpool, and its people.These people exposed the liars, and were the inspiration behind the words of Deliverance, a poem I wrote, displayed as an artwork. You can see it  on this blog post.  I was reading some of the poems on their website, real accounts, expressed from the mouths of the people who were there, and who witnessed it for themselves. They have created Social History, and have allowed the floodgates to open for other recent injustices and scandals, and their voice deserves to be heard repeatedly, and at every level in society, until Justice is served on all those implicated in the cover up. If you never have before, please read their stories http://www.contrast.org/hillsborough/
some are no longer here to tell theirs, they died of shattered hearts. And they continue to do so, three commited suicide last year alone.

I was just reading what somebody wrote about my work Deliverance,

'In Deliverance, by combining poetry with sculpture, Terry has managed to capture the spirit of the city of Liverpool. Political, contemporary and poignant, this is a relevant piece that manages to capture the zeitgeist of the city in the wake of the recent Hillsborough findings. Liverpool is a unique city, and this piece is uniquely Liverpool in its approach and execution.'

So I'm looking at what forum I want to display Deliverance this year, and will start to look for the right opportunities.