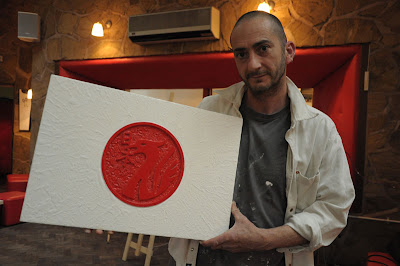 Its been too long, best do a blog. Long time since I've seen this too. It's a Japanese flag I made, to support the cause 'Liverpool for Japan', a collective of creative fund raising activities to support the 2011 Tsunami affected victims and their families in Japan. The carved central piece depicts the Liverbird with the Japanese symbol for Japan in its beak, set against my interpretation of a cracked and crazed land with water flowing  through. I called the piece Liverpool for Japan, and used simple and iconic symbolism to convey. It was selected for  inclusion in an art auction, together with work by 13 other local artists,  including Adrian Henri, Willie Russel , Bernadette O’Toole and others, and held its own on the sale floor amongst them.
This picture got sent to me a month or so ago, and its the first time I've really had a chance to look at the piece. Deadlines being deadlines, and me only being able to devote time to it after the day-job, it got taken out of my oven at 5.15, (where it had been drying) and driven over to Liverpool and handed over at 5.55, on sale for 6.00!
Like so many of the things I've created to date, I'm so busy doing them, then I hand them over to somebody else, and never really ever get the time to look and appreciate. I'm quite proud of this looking back, and pleased somebody took a picture of it, else like so many other creations, it would be another one I'd never see again. 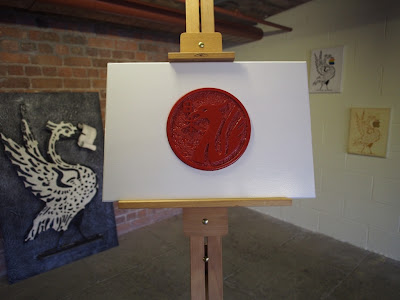