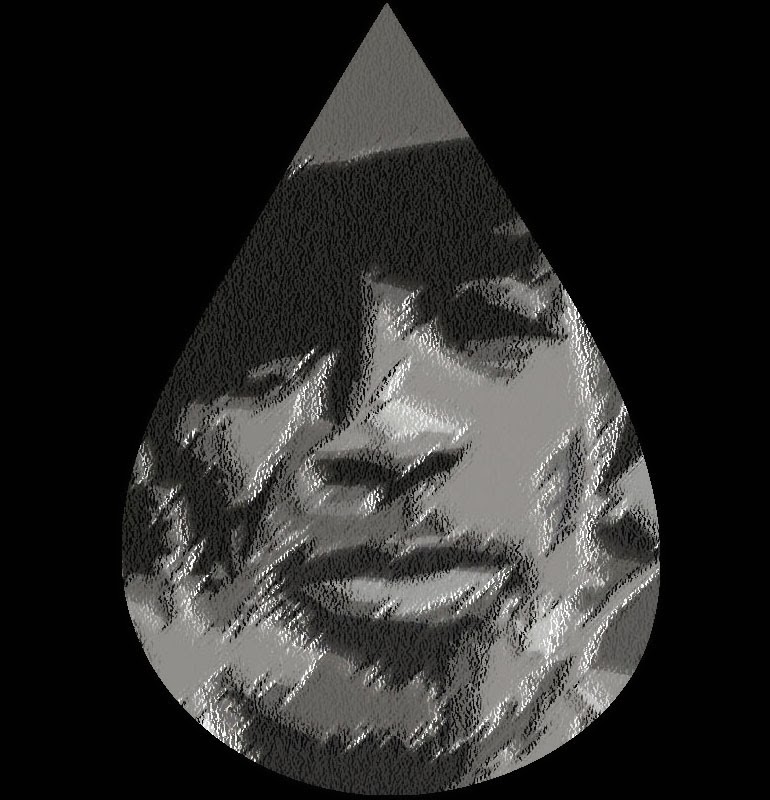 I was commissioned earlier this year, the brief being to liven up a large gable wall belonging to Benricks coffee shop and cafe, along the busy Woodchurch Road on the Wirral.
So I'm about to start work on both a mural, and the associated art which will be my project for this years Liverpool Biennial as a registered independent.  I had an exhibition as part of it two years ago, with my two main pieces Deliverance, and McRings, 2012. It was a big step in my art at the time, and a learning experience.
The mural will form part of 'B-Movie', inspired by the words of Gil Scott Heron's track of the same name, and my artistic interpretation of a song that I first heard in the mid eighties, falling in love back then with the monotonous and repetitive heavy beat, and a style of delivery that was unique to my ears at that time.
Featuring prominently will be the AlJazeera logo, teardrop shaped and made up of Arabic script, and I've read that it translates as 'peninsula', the perfect symbol for my Wirral based project.
I've been watching AlJazeera for a good few years now. Sadly, as a Country, I don't think we realise how out of step we are with so many Countries round the Globe. Maybee we're too busy two-steppin' with the USA?
You learn a lot watching AlJazeera. This week on a past episode of Earthrise I've seen how in Spain, they're currently building a plant that turns algae into oil. The algae feeds on CO2, so they're building it next to one of Spains largest CO2 emmitters, a cement plant.  Spains emmissions would fall by 20%, whilst also producing millions of barrels of oil. The one that got me though, was a technique using sea water and fresh water, seperated by a membrane that lets the fresh water pass into the seawater, but not vice-versa. They've now perfected it, so a system built into the basement of a large building would create enough energy to power not only the building, but the neighborhood too. No emissions, no toxic chemicals, just water and green renewable energy. Given that we live on an Island surrounded by salt water, why aren't we doing this? Simple reverse osmosis. No environmental catastrophies with after effects lasting for generations, more like, ''Number 5 membranes blown, go get the mop and bucket. Clean up on tank 3.'' Instead, we're going to frack. One day they'll be fracking near you, polluting the groundwater with toxic chemicals, and you'll have to get used to earth tremors. The Company doing it will be sold to the highest bidder, someone like Cuadrilla. They can't do it in their home Country because it's illegal, but it's OK here.
And its because we're allied to the USA, who are still allied to Oil. And its being sold to us against a narrative of big bad Russia turning off the gas tap. There's even a race to the bottom now. We're going to re-open the investigation of the death  of Alexander Litvinenko, but bigger and bolder come the Yanks, who last night claim Russia broke a nuclear test-fire treaty, back in the days of Ronald Reagan, which coincidentally was when Gil Scott Heron wrote B-Movie. All this against a background of chaos in the Middle East, but it's OK, Tony Blair is the Peace Envoy. The whole of the UN last week wanted to open an inquiry into the actions of Israel on Gaza, but the USA was the only one who vetoed it. We didn't have the balls, so abstained. Out of touch with the rest of the world, with Cameron defending Israel's right to defend themselves against Hamas, who incidentally are Democratically elected, but not recognised as such by the US.. The UN vote was covered by AlJazeera, but I didn't hear much mention of it on mainstream news. There's a human tragedy happening, and the numbers speak for themselves. It's all wrong, on both sides.
Meanwhile at home, Cameron is going to get tough on immigrants, sadly heralding a theme song for the next General Election. If you've never listened to B-Movie, do it now. Is he talking about 1981 or 2014? Hard to tell apart from the names.

So hope my artistic interpretation does it justice, and with a bit of luck will be ready in 3 or 4 weeks.
Thanks to Richard and Jane from Benricks, Andy the manager from Robinson Neals in Birkenhead who've supplied me with all the painting and clean up materials free of charge. Steve from Birkenhead roofing, who have donated all the timber. Two local companies, who despite tough economic times, are helping to make this project happen.